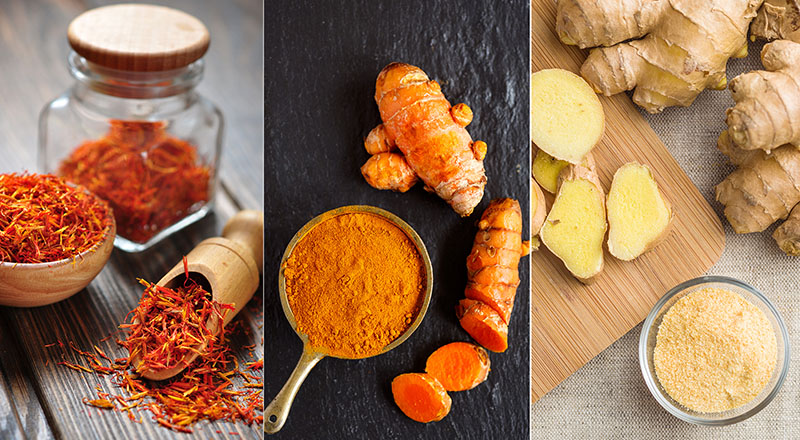 Several common spices have received a lot of attention as their therapeutic uses add to their culinary tradition. Here we take a closer look 3 golden spices and their benefits that go beyond the palate.

Ginger:  Ginger is a tonic herb for the digestive system, loved by many for its tummy calming properties. Ginger has been shown to help improve digestion, help protect against stress-induced ulcers, and it’s been shown to be effective for various forms of nausea – from motion sickness to morning sickness. Ginger also acts like a natural anti-inflammatory, improving circulation, reducing inflammation and reducing pain associated with arthritis, headaches and menstrual cycles. During winter, ginger is a warming spice that can bring comfort when symptoms of a cold are present.

Use it: Grate ginger into stirfry and soup; drink real ginger ale or ginger tea, use ginger syrup as a soothing remedy for a cold; use ginger candies or ginger capsules when you travel.

Saffron:  The exotic Saffron spice is known for its distinct color and flavor, but also has a long history of medicinal use in Eastern and Western medicine. Saffron has been used as an aid to control appetite, with studies showing people who took saffron snacked less and lost more weight. Saffron has been used to support mood health. In a review of 6 placebo-comparison trials, saffron exhibited antidepressant activity similar to antidepressant medications. Research also suggests saffron may be helpful for symptoms of PMS and may play a role in cognition and memory health.

Use it: Use saffron in traditional paella, or try this Vegan Paella; drink saffron tea; keep saffron capsules on hand for healthy appetite or mood.

Turmeric:  Most people know turmeric as the main ingredient of curry powder, used to flavor traditional Indian dishes.  Curcumin, responsible for the yellow color of turmeric, is the active compound of turmeric and has been shown to have several benefits in the body. Curcumin is best known as an antioxidant and anti-inflammatory. Studies have shown that curcumin even outperforms other non-steroidal anti-inflammatory drugs (NSAIDS), such as ibuprofen, when it comes to pain and inflammation. The antioxidant and anti-inflammatory actions of turmeric make it helpful for the heart and may help keep the lining of veins and arteries healthy. Research is looking at other potential roles for curcumin in GI health, cancer and Alzheimer’s Disease.

Use it: Add turmeric powder to roasted vegetables; drink golden milk or turmeric tea in the evening; use turmeric capsules for natural inflammation and pain control.