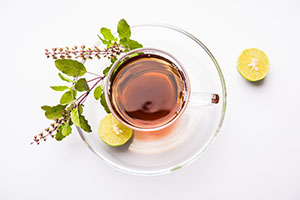 One thing virtually everyone could use is help for dealing with STRESS! And one way we can do that is with adaptogens. The term adaptogen is used for herbs that are safe to use, that can increase resistance to stress and/or that have a normalizing effect on body systems. Here are just a few of the numerous herbs considered to be adaptogens.

Holy Basil: Hindus have used Holy Basil for thousands of years for mind, body, and spirit benefits, believing this plant balances and tones the energy chakras of the body.  Holy Basil helps the body adapt to stress, usually through support of adrenal gland function.  Holy Basil is also a known antioxidant which has been found to protect cells against low level radiation. Other studies show Holy Basil strengthens nerves, promotes calm and supports mental clarity.

Eleuthero:  Eleuthero, formerly known as Siberian Ginseng, helps minimize the negative effects of stress in the body, combating fatigue and adrenal exhaustion, and improving energy. It also has anti-inflammatory and antioxidant properties. Rich in polysaccharides that stimulate the immune system, eleuthero has been shown to improve immune system function by raising T-lymphocyte levels.

Rhodiola:  Russian scientists have found that Rhodiola can improve both mental and physical performance, reduce fatigue, and prevent sickness related to high altitudes.  Rhodiola has also been shown to reduce cortisol production, one of the primary stress hormones in the body that has been linked to metabolic changes including increased blood sugar and increased fat storage in the abdomen.  Rhodiola is also rich in compounds called phenols which have strong antioxidant properties.

Cordyceps: Cordyceps is the world’s most researched mushroom for increasing stamina and endurance.  Cordyceps is often used to fight fatigue, support respiratory health, and to increase physical and mental energy. Like other mushrooms, it contains glucans which support deep immune health and may provide an anticancer benefit.